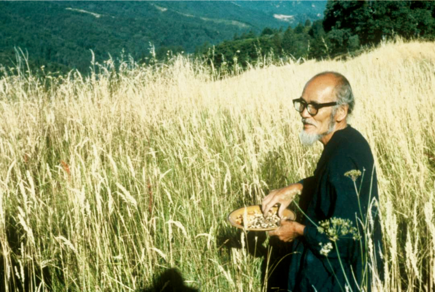 Masanobu Fukuoka (1913-2008) was a visionary ecologist, farmer and author. His pursuit of a balanced life within a healthy productive environment was carried out on a small scale, but with an originality and defiance of accepted wisdom that has inspired others around the world. “The ultimate goal of farming,” Mr. Fukuoka says, “is not the growing of crops, but the cultivation and perfection of human beings.” (One Straw Revolution, p. xiv)

Fukuoka began his career as a scientist based in Yokohama working for the Japanese government. He researched ways of combatting diseases in valuable agricultural crops. He was happy and successful. Then, while still a young man, he was hospitalized with pneumonia. During his recovery, he had a spiritual awakening, which led him to question everything he had previously been taught. He scoured the countryside in search of traditional farms, asking about farming methods before the arrival of modern chemicals and large machinery. Could it be that the technology used in industrial farming was creating more problems than it solved? Were the designers of ever-more powerful fertilizers, pesticides and genetically-modified crops moving in the wrong direction? Was there an alternative path that would not be so disruptive of native eco-systems?

Fukuoka resigned his government position to become a farmer, moving back to his father’s farm on the southern island of Shikoku to take care of a hillside orchard. Here Fukuoka applied traditional non-invasive approaches to growing fruit and rice. News of his unusual methods spread and visitors began arriving at his farm, many of whom became volunteer workers. Teaching these young recruits led Fukuoka to jot down his ideas. The resulting book, One Straw Revolution, published in 1975, was an astonishing statement of a creed of simplicity and adherence to natural ways.

In his preface to the English language edition that appeared in 1978,  poet and activist Wendell Berry comments: “Mr. Fukuoka has understood that we cannot isolate one aspect of life from another. When we change the way we grow our food, we change our food, we change society, we change our values. And so this book is about paying attention to relationships, to causes and effects, and it is about being responsible for what one knows.” (p. xii) 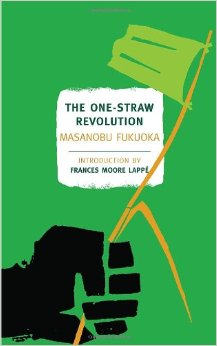 Here is a sampling from the book. I start with Fukuoka’s contrast of his own traditional farm with that of a modernized neighbouring farm.

“Make your way carefully through these fields. Dragonflies and moths fly up in a flurry. Honeybees buzz from blossom to blossom. Part the leaves and you will see insects, spiders, frogs, lizards, and many other small animals bustling about in the cool shade. Moles and earthworms burrow beneath the surface. This is a balanced rice field ecosystem. Insect and plant communities maintain a stable relationship here. It is not uncommon for a plant disease to sweep through the area, leaving the crops in these fields unaffected.

“And now look over at the neighbor’s field for a moment. The weeds have all been wiped out by herbicides and cultivation. The soil animals and insects have been exterminated by poison. The soil has been burned clean of organic matter and micro-organisms by chemical fertilizers. In the summer you see farmers at work in the fields, wearing gas masks and long rubber gloves. These rice fields, which have been farmed continuously for over 1,500 years, have now been laid waste by the exploitive farming practices of a single generation.”

Fukuoka goes on to outline the core ideas that differentiate his approach from large commercial practices. He calls these the “four principles of natural farming.”

“The first is no cultivation, that is, no plowing or turning of the soil. For centuries, farmers assumed that plowing is essential for growing crops. However, non-cultivation is fundamental to natural farming. The earth cultivates itself naturally be means of the penetration of plant roots and the activities of micro-organisms, small animals and earthworms. The second is no chemical fertilizer or prepared compost. People interfere with nature, and, try as they may, they cannot heal the resulting wounds. The third is no weeding by tillage or herbicide. Weeds play their part in building soil fertility and in balancing the biological community. As a fundamental principle, weeds should be controlled, not eliminated. Straw mulch, a ground cover of white clover interplanted with the crops and temporary flooding provide effective weed control in my fields. The fourth is no dependence on chemicals. From the time that weak plants developed as a result of such unnatural practices as plowing and fertilizing, disease and insect imbalance became a great problem in agriculture. Nature, left alone, is in perfect balance.” (p. 33-34)

In the middle of his book, Fukuoka discusses the need for rethinking long-standing harmful practices. He points out that once a practice becomes habitual, no matter how ineffective it proves, people have trouble changing course because their minds have grasped hold of a fixed idea that seems all but unshakable.

“To the extent that the consciousness of everyone is not fundamentally transformed, pollution will not cease.” (p. 82)

“When a decision is made to cope with the symptoms of a problem, it is generally assumed that the corrective measures will solve the problem itself. They seldom do … Until the modern faith in big technological solutions can be overturned, pollution will only get worse.” (p. 84)

In the final section to his book, Fukuoka turns his attention to the subject of food. He argues that people’s diets are unhealthy because they are based on ill-conceived notions of what is and isn’t tasty. The prejudice against simple natural foods is an acquired cultural absurdity.

“A natural person can achieve right diet because his instinct is in proper working order. He is satisfied with simple food; it is nutritious, tastes good , and is useful daily medicine.Food and the human spirit are united. ” (p.136)

“Modern people have lost their clear instinct … They go out seeking a variety of flavours. Their diet becomes disordered; the gap between likes and dislikes widens, and their instincts become more and more bewildered. At this point people begin to apply strong seasoning to their food and to use elaborate cooking techniques, further deepening the confusion. Food and the human spirit have become estranged.” (p. 136)

“People nowadays eat with their minds, not with their bodies … Foods taste good to a person not necessarily because they have nature’s subtle flavours and are nourishing to the body, but because his taste has been conditioned to the idea that they taste good.” (p. 137)

Even by the standards of most conscientious organic farmers, Fukuoka’s methods often appear radical. Critics view his ideas as impractical or unsuited for Western climates and conditions. Fukuoka counters that his methods are not quick easy fixes. Patience and experimentation are required. What Fukuoka has achieved is help spark a debate about food and land use, a debate which gains in  relevance as concerns mount over the health risks of GMOs, pesticides and land depletion. Fukuoka is now regarded as a pioneer of the permaculture movement. His vision of farming as a seeking of balance in a larger ecosystem offers a healthy alternative to the destructive practices that are currently employed.