Fernand Léger. Animated Landscape, 1924. Cubist painters like Léger were fascinated by the geometric signs and competing signals of the modern city.

In James Joyce’s great modernist novel Ulysses, the city of Dublin emerges as a complex multi-storied universe. Fifty years earlier, Dickens and Balzac created similar effects with London and Paris. In these great city novels, fiction mixes with reality, satire and social issues. Joyce departs from the 19th century model by unfolding his story in a single day and by using a variety of experimental prose techniques that draw attention to the act of writing. Influenced by Cubist collage, Ulysses resembles a modernist work of art.

Modernism takes root in cities, where artists pushed for new ways of seeing. Cinema was at the forefront of this development. No film stretches the limits of perception more forcefully or imaginatively than Dziga Vertov’s The Man With a Movie Camera, 1929. The film bursts with the energy of tram cars, large machines, and crowds eager to get somewhere, do things, and be entertained. What’s more, Vertov’s film uses odd angles, quick cuts, and visual tricks. The filmmaker is only too pleased to reveal the secrets behind his mesmerizing effects by including “making of” shots of how the film was made.

When critics and reviewers first saw Vertov’s film, they thought he was making impossible demands on the viewer. The editing was simply too fast, the variety of camera angles too bewildering, the leaps from one scene to another too disorienting. The film uses no titles to explain anything. No narrator describes the action. No voice-over makes an argument. No expert teaches a lesson. The city’s pace is unrelenting: people and their machines are shown as a dynamic network at work and play. 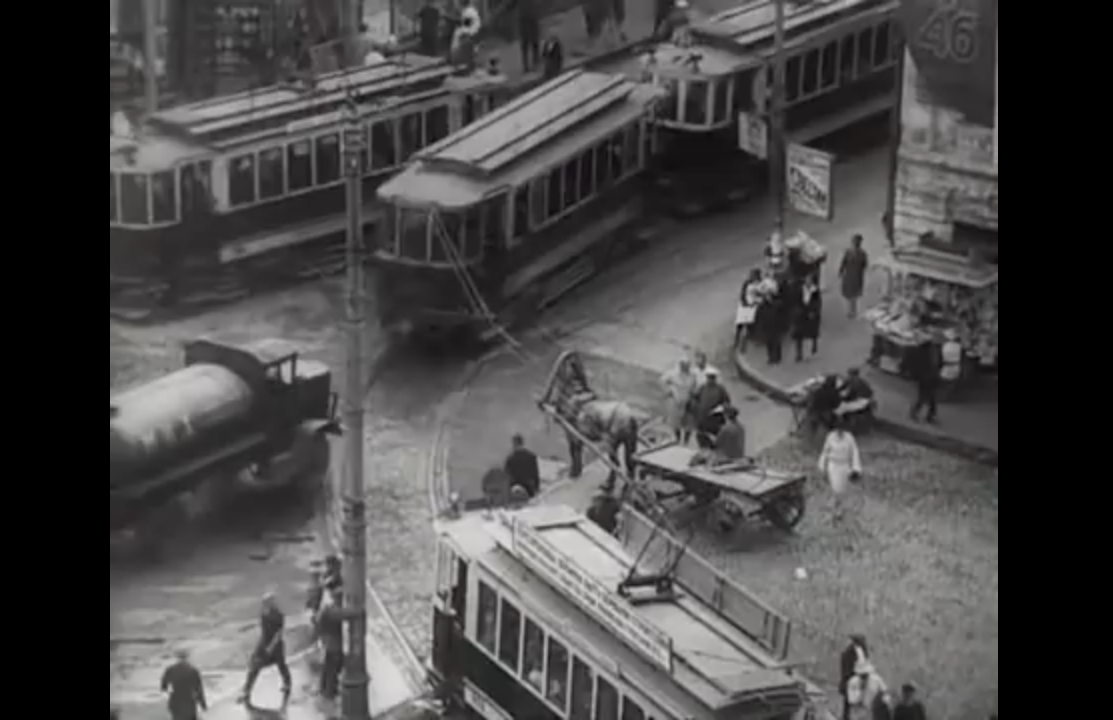 In his review of this groundbreaking classic, Roger Ebert commented: “There had been ‘city documentaries’ earlier, showing a day in the life of a metropolis; one of the most famous was Berlin: Symphony of a Great City, 1927. By filming in three cities [Moscow, Kiev and Odessa] and not naming any of them , Vertov had a wider focus. His film was about The City, and The Cinema, and The Man with a Movie Camera. It was about the act of seeing, being seen, preparing to see, processing what had been seen, and finally seeing it. It made explicit and poetic the astonishing gift the cinema made possible, of arranging what we see, ordering it, imposing a rhythm and language on it, and transcending it.” (rogerebert.com, July 1, 2009)

And now all these tricks, jumps, speed editing and behind-the-scenes “how to” revelations have been fully absorbed into mainstream media. Just about any music video contains several of these “disorientations.” It is impossible to imagine a thriller, spy movie, or summer blockbuster without scenes of a bustling metropolis, without a bevy of multiple converging storylines, without information transmitting at dizzying speeds, without information networks seeming all-encompassing and inescapable. This is Vertov’s world. 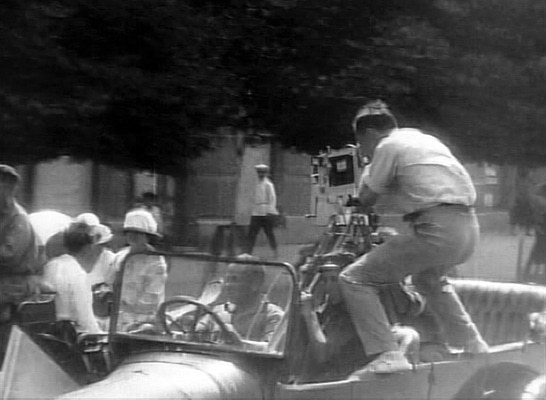 The Man with A Movie Camera shows how the film is made. Here cameraman Mikhail Kaufman perches on the side of a moving car to get an exciting shot.

In 2008, my wife and I spent a year in Berlin. Europe was vastly different from Canada: its food, housing, schools and public transport. No swiping of tickets, no turnstiles. The famous Ring line and U systems carried trains above and below ground to all corners of the city. My short film, Scratch Peck Fly, included some fun train shots, but its focus was on birds in the city. Like Vertov’s film, my short was equal parts documentary, travelog, and art film. It used no narrator, no voice-over. As far as I was concerned, Vertov was ground zero for the independent filmmaker who ventures into the world without script or budget. Gags, stunts, shooting from the hip in foreign cities, personal film diaries–it’s the very stuff of YouTube videos. 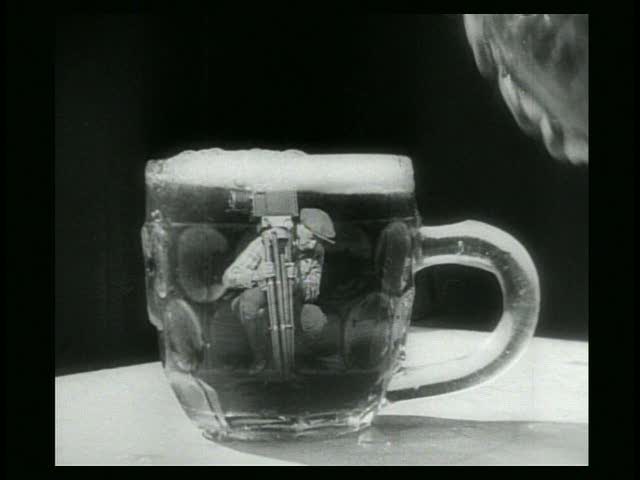 The Man with a Movie Camera, one of many trick shots that adds humour to the film

Another appeal of these early city films is the use of humour to offset the aggrandizement of cities and machines. In The Man With a Movie Camera, a cameraman is shrunk to tiny size to set up a camera inside a glass of beer. Later in the film, a camera and tripod assemble themselves and walk out of the frame. Can a film make itself with no human intervention? In a Russian avant-garde film, they can. In Jean Vigo’s surrealist city film, À Propos de Nice, 1930, tourists are shown (candid-camera style) reading newspapers at outdoor cafés. Before long, a man drops his paper and falls asleep. An older gentleman nods off. A lady in furs is next to slip away. The whole city seems to have fallen asleep, all in public, in the middle of a day. These scenes are amusing, but also carry an undercurrent of social criticism: the idle rich are so idle they can barely stay awake.

Koyaanisqatsi: Life Out of Balance, 1982, a two hour long American art film, follows in the great city film tradition. The filmmakers use no narration, just dazzling camera work and the sort of optical effects you might see at a pavilion in a world’s fair to convey a sense of industry and urbanization overtaking the planet. A social critique is intended. But as vlogger Kyle Kallgren argues in his essay on the film, every shot of Koyaanisqatsi has either been used before or since to underscore the very opposite position, namely that cities are fast, fun and impossible to resist.

One cannot get too righteous or indignant over the pace of progress, the disasters of progress, the uncontrollable excitement of living in an environment that changes more rapidly than we can possibly comprehend. 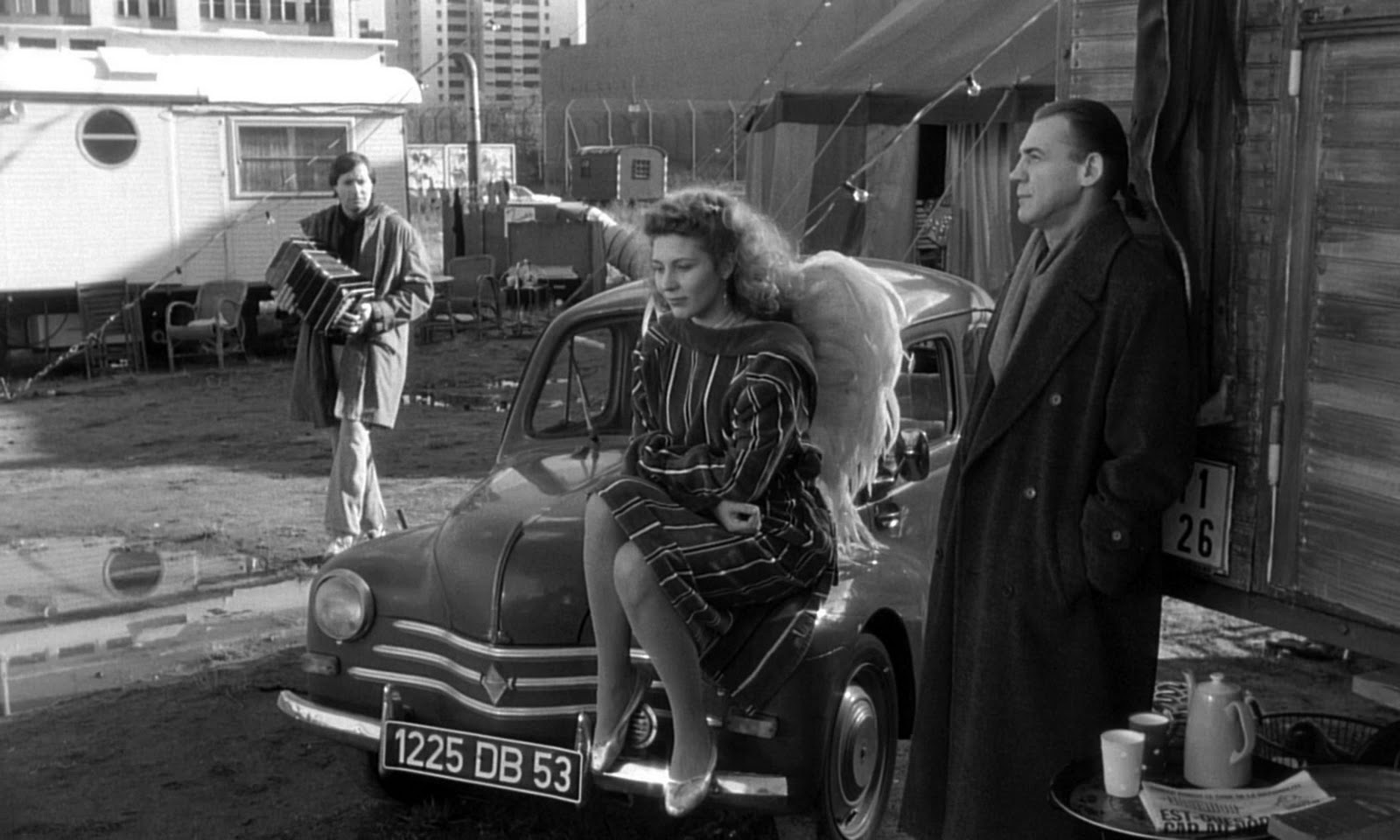 In Wings of Desire, 1987, an angel (Bruno Gatz) falls in love with a trapeze artist (Solveig Dommartin). She cannot see or hear him, but can only sense his presence.

Five years later a German film appeared, Wings of Desire, (Der Himmel uber Berlin)1987, directed by Wim Wenders, written by playwright Peter Handke, and starring, alongside a brilliant cast, America’s favourite detective, Peter Falk and Australian rocker Nick Cave. The film features a group of mind reading angels who wander the streets of Berlin eavesdropping on everyday scenes, but powerless to avert human tragedy. The angels are simply there to observe, to comfort, to record and empathize. Like the human characters, the angels are engulfed by the city and merge into its multitude of overlapping stories. After years of observation, some of these city-dwelling angels choose to become human. By choosing earth over heaven, human problems over divine equanimity, human love over spiritual compassion, the angels cross a line from observer to participant that many of us would do well to follow.