A woman gave birth to Frankenstein and his monster, opening the door for a new imaginative literature. Strangely, this literature, dealing with the future, with alternate worlds, with technology and its societal effects, became an exclusive all-men’s club. All this began to change with the emergence of a group of brilliant novelists in the late 1960s and early 70s: Ursula K. LeGuin, Doris Lessing, Kate Wilhelm, Marge Piercy and Margaret Atwood, to name only a few. This blog contrasts Marge Piercy’s Woman on the Edge of Time, 1977, with Margaret Atwood’s The Handmaid’s Tale, 1985 and discusses their contribution to the genre of SF. 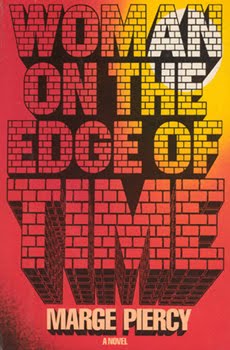 Woman on the Edge

Marge Piercy. Woman on the Edge of Time, 1976. Summary: Consuelo (Connie) Ramos is placed in a mental hospital after trying to intervene in a violent family dispute. No one believes her side of the story because she is a poor Chicano woman. While in hospital, Connie begins communicating with a person from the future, Luciente, who asks her for her help. Connie answers that she is a person without power, mislabeled as insane, with no resources and no prospects. Why was she chosen? Connie is told that she has a receptive mind and that she is the only one the future people were able to make contact with. Connie is given a tour of a Utopian future world, but it is a fragile world, only attained if it is fought for by the people of the present. 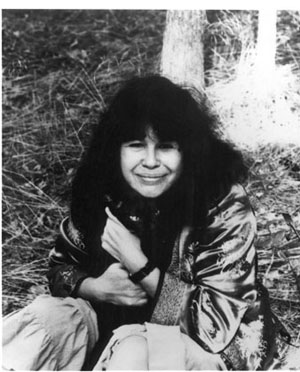 In a perceptive review, Michelle Erica Green notes: “Woman on the Edge of Time is an angry text. The utopian yearning cannot disguise its rage … Yet the prose, in both the science fiction segments and the fatalistic present, has the compelling flow of poetry, and the bluntness of Connie’s self-expression keeps her grounded even when she questions her own sanity. Like her main character, Piercy labels the effort to transform the world a war. Known for her radical political activism in the 1960s — particularly for her involvement with groups which advocated armed struggle — Piercy favors violent insurgence in many of her poems and novels. Yet she chooses writing, not violence, as her means of insurrection. Connie’s violence may not be able to safeguard the future, but Piercy’s unshrinking commitment to finding radical solutions to age-old problems itself offers hope for the strength of the human spirit.”

A few things that impressed me about this novel:

Piercy contrasts a brutal, gritty depiction of poverty and prejudice in present-time America with the communal-minded future utopia. Class, gender and race merge together as issues crucial to SF and any imagined future community. What makes the story so effective is the likeable but unheroic character of Connie. She has no superpowers apart from her channeling ability and struggles throughout the story to try to understand how one without power can–and must–resist those who oppress her. She is told: “There’s always a thing you can deny an oppressor, if only your allegiance. Your belief. Your co-opting. Often even with vastly unequal power, you can find or force an opening to fight back. In your time many without power found ways to fight. Till that became a power.” (p. 317) The reader reacts to this awakening conscience with a considerable degree of ambiguity: is the heroine suffering from madness or does she have a kind of visionary revelation? This ambiguity breathes new life into the theme of medical experiments and forceful confinement, making for considerable suspense while deepening the sense of a problem that must be answered. 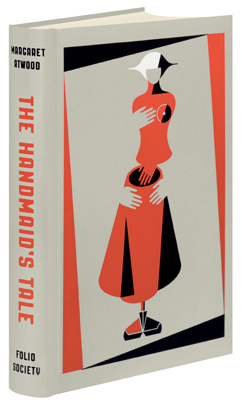 Margaret Atwood. The Handmaid’s Tale, 1985. Summary: A diary-like account by an enslaved surrogate mother detailing the regime of a newly-installed totalitarian state, a theocracy in which women have no freedom and no voice. The handmaids wear awkward burqa-like uniforms that hide their figures and restrict their vision. It is a familiar story of a fundamentalist religious society that banishes love, told from a woman’s point-of-view. Most characters are so demoralized that they submissively accept their fates. The heroine, Offred, named as the possession of the Commander who she sexually serves, is plagued by memories of a former time spent with her husband, daughter and lively friends, none of whom she can now locate or account for.  The commander takes advantage of his privileged position to indulge person whims and attempts to turn his slave into his mistress, with unsatisfactory results. Out of a desperate need for some genuine human contact, Offred has a clandestine love affair with another servant. She does not know if she can trust this lover and lives in fear that she will be betrayed at any moment. 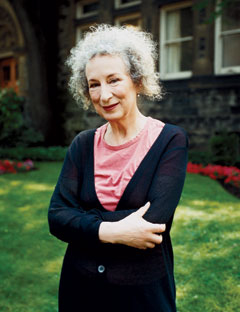 Atwood shows how quickly a society can form which removes basic rights and privileges from women. It starts when women are not allowed to hold jobs or to own property or to access bank accounts. In this way, women become economically dependent on men. Loss of economic power, loss of autonomy.

The women who are breeders are treated like cattle, prisoners–this does not sound terribly original. What is original is that their prison guards, their disciplinarians, are other women–the oppressive and hateful aunts. On a day-to-day basis, it is women who most diligently enforce inequality and loss of self-respect, loss of personhood. Women who buy into and safeguard the system of oppression against women are one of the most serious problems posed by the novel. As for the men in the novel, they get their own special treatment as rapists, power-mongers, zealots and religious hypocrites. The oppression of women is all performed in the name of religion. This hardly seems like SF, more of a commentary on Christian fundamentalism and Islamic extremism.

The heroine does not believe in the system she is forced to live under, but she doesn’t know how to act against it. A turning point for her comes when she meets a once-fierce rebellious friend who seems to have given up. “‘Moira,’ I say. ‘You don’t mean that.’ She is frightening me now, because what I hear in her voice is indifference, a lack of volition. Have they really done it to her then, taken away something–what?–that used to be so central to her? But how can I expect her to go on, with my idea of her courage, live it through, act it out, when I myself do not? I don’t want her to be like me. Give in, go along, save her skin. That is what it comes down to. I want gallantry from her, swashbuckling, heroism, single-handed combat. Something I lack.” (p. 261) Denied this vicarious resistance, Atwood’s heroine finally attains the courage–or despair–the feeling of nothing to lose–to throw caution to the wind, setting in course a chain of events that transforms her life.

Both Atwood and Piercy are outspoken poets who write novels in many genres, including science-fiction. The works discussed above could be described as feminist or political SF novels. In her depiction of the future, Piercy addresses the problem of over-population, harmful attitudes toward environment and technology. Atwood is concerned with the breakdown of democracy, the erosion of basic human rights and the exploitation of women.

Both novels are concerned with the non-chalance with which we judge and mistreat others different from ourselves.  In Piercy’s novel, Connie meets a person of the future who boasts of going mad twice. Jackrabbit describes his madness: “I’m jealous of everybody’s gifts. I want to be everybody and feel everything and do everything. Wherever I am, where I’m not plagues me. As long as I don’t have to get up too early in the morning to do it all…” Connie answers, speaking out about her own experience with mental illness: “Do you tell everyone you meet that you’ve been mad twice?” She resented his casual, almost boastful air. She lugged that radioactive fact around New York like a hidden sore. To find out she had been in an institution scared people–how it scared them. Not a good risk for a job. They feared madness might prove contagious.” (p. 117)

A fear of difference, with no true sense of collective. Reading these novels, one feels a growing sense of protest and a need to revisit social positions. This is not science fiction as escapism or science fiction as technological wonder or technological horror. It is science fiction grounded in political realities, calling for the decent treatment of others through an awakened political conscience. I’d like to end on a vision of a committed life in this poem by Marge Piercy from the collection, “The Moon is Always Female”, published by Alfred A. Knopf in 1980.

Alone, you can fight, you can refuse, you can take what revenge you can but they roll over you. But two people fighting back to back can cut through a mob, a snake-dancing file can break a cordon, an army can meet an army. Two people can keep each other sane, can give support, conviction, love, massage, hope, sex. Three people are a delegation, a committee, a wedge. With four you can play bridge and start an organization. With six you can rent a whole house, eat pie for dinner with no seconds, and hold a fund raising party. A dozen makes a demonstration. A hundred fill a hall. A thousand have solidarity and your own newsletter; ten thousand, power and your own paper; a hundred thousand, your own media; ten million, your own country. It goes on one at a time. It starts when you care to act, it starts when you do it again after they said no, it starts when you say We and know who you mean, and each day you mean one more.